Friends of the Old Schoolhouse

Home  Friends of the Old Schoolhouse

In Autumn 2013, the Underhill Selectboard authorized Pete Czaja to put a Task Force together to explore the possibility of a Schoolhouse restoration. Task Force members who saw the report to completion, included Pete Czaja, Susan Thomas and Roger Frey. They formed a steering committee to be known as Friends of the Old Schoolhouse, soon after the Task Force report was finished in Autumn of  2014.

The Friends Committee was formed as an Underhill Historical Society (UHS) sub-committee in order to accomplish 3  goals:

At a Town Meeting in 2015, the Task Force presented a written survey completed by over 350 respondents. The outcome showed that 84% of the townsfolk were in favor of restoration. By the summer of 2015, the UHS had created a plan for restoration and began fundraising. We were successful in raising the funds required for 2016 work planned. 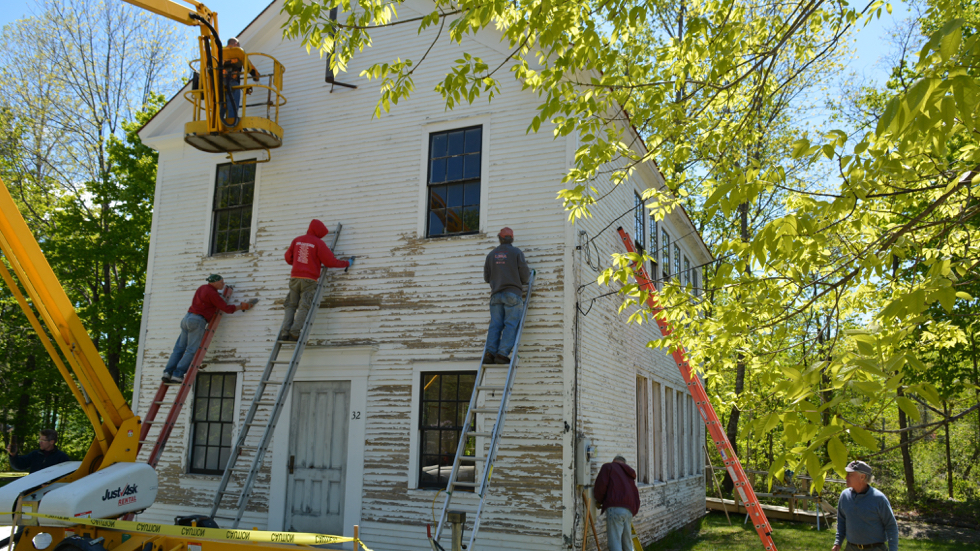 In 2016, restoration of the north side of the schoolhouse was completed. We also completed some repairs to 2nd floor. Also in 2016, Susan Thomas wrote a State of Vermont Preservation Grant that was awarded funding in December, 2016, with conditions to complete the use of the grant as far out as December 2018. The  work scheduled was largely for 3 exterior walls and the window frames. We were also fortunate in 2016 to have a skilled local craftsman donate his time to restore the window sashes. To date, he has restored 13 sashes, with 10 left to complete.

In 2016, we were successful in raising needed moneys for 2017 restoration. Unfortunately, we have not had a contractor bid that was within our budget and therefore exterior work we hoped to complete in 2017 will have to be completed in 2018. We were able to have some local contractors through efforts of Pete Czaja continue to make improvements to the 2nd floor Old Schoolhouse. We also have approval for and are hoping to have the chimney repaired before the end of 2017.

UHS Officers have asked Friends of the Old Schoolhouse Steering Committee to stay active until the restoration is completed.