Gone but Not Forgotten: The Doran Cemetery

By Scott A. McLaughlin 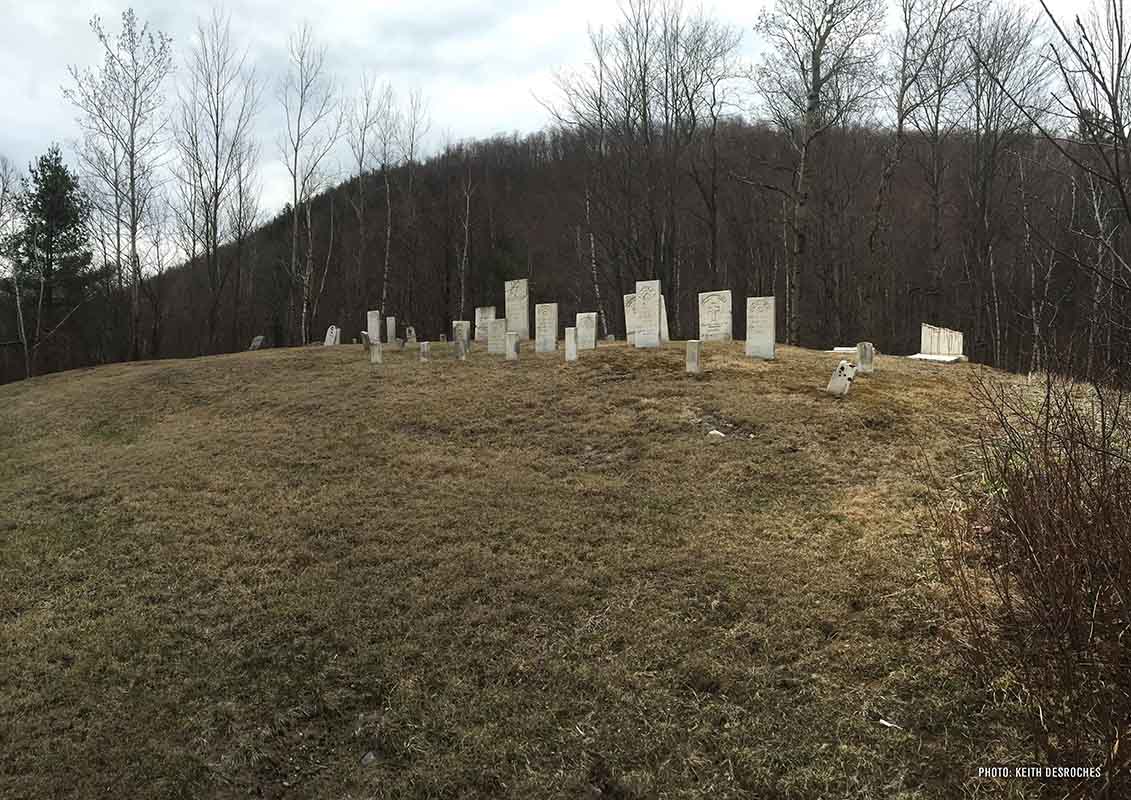 In Underhill, Vermont, a historic resource is slowly being destroyed. The layout, form, and landscape of a small Irish Catholic cemetery are being transformed by both natural and human events. The headstones, fences, vegetation, and topography of the cemetery are being altered. Without the documentation of these important changes, a phase in the history of the cemetery will be lost. One cannot prevent change; therefore, we must compile historical documents and the visible evidence of the landscape in an effort to better understand the processes that shape our world. Through observations and historical research, we hope to gain a better understanding of how the cemetery came to be, why it has been abandoned, and who is buried there. 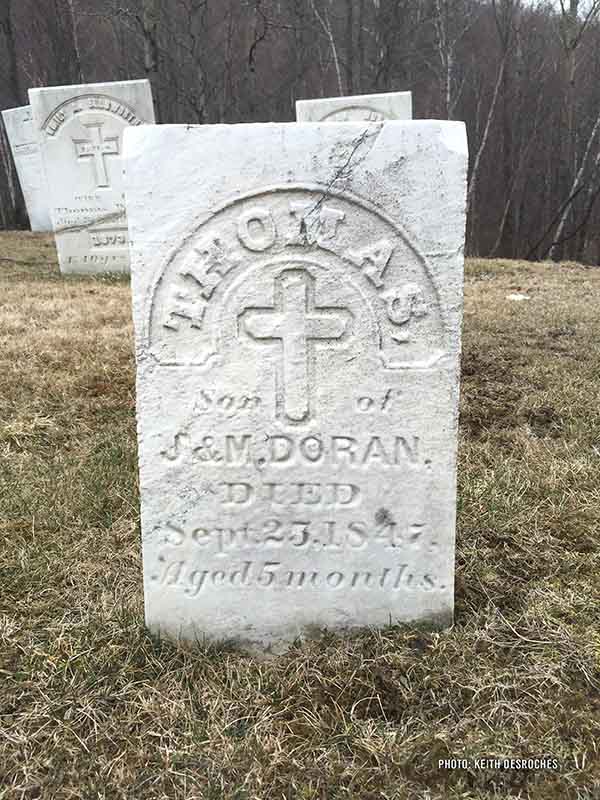 THE FOUNDING AND ABANDONMENT OF THE DORAN CEMETERY

A small Irish-Catholic cemetery often referred to as the “Catholic Cemetery on the Valley Road,” the “Pleasant Valley Cemetery,” or the “Doran Cemetery” is located on the Pleasant Valley Road in Underhill. According to the headstones, the cemetery served the needs of this small mountainous community from 1847 until 1878. Patrick Doran donated the plot of land, which the cemetery occupies today, to the Rt. Rev. Bishop Fenwick of Boston, Massachusetts. The land was to be used for a Catholic Church and cemetery to serve the needs of the growing Irish-Catholic communities in the Irish Settlement and the Pleasant Valley areas (Luck 1970:15). The date of the transfer was September 1, 1846 (The J. J. Ryder Company 1899:9).
The population of Underhill in 1791 was sixty-five; by 1800, it had reached 212 (Dwyer 76:3); and by 1840, 1441 people lived in town. The steady increase in the number of inhabitants of Underhill continued throughout the early nineteenth century as a result of the thriving local lumber and agricultural industries.
The Irish Settlement Cemetery, located on Irish Settlement Road, was another Catholic cemetery in use at the same time as the Doran Cemetery. The Irish Settlement community also had hoped that a Catholic Church would stand beside their cemetery. Together the cemetery and church would serve the Catholic community of Underhill (Luck 1970:15). From the headstones in the Irish Settlement Cemetery, it appears that it was first used in 18311.  A church was never built on the former Doran property or near the Irish Settlement Cemetery.
In 1856, Rt. Rev. Bishop Louis DeGoesbriand of the new diocese of Burlington decided that the St. Thomas Church would be built in “Union Village’ or Underhill Center as it is known today (Dwyer 1976: 11 ). In 1873, the land was purchased by the St. Thomas Parish on Range Road to serve as the Catholic cemetery. 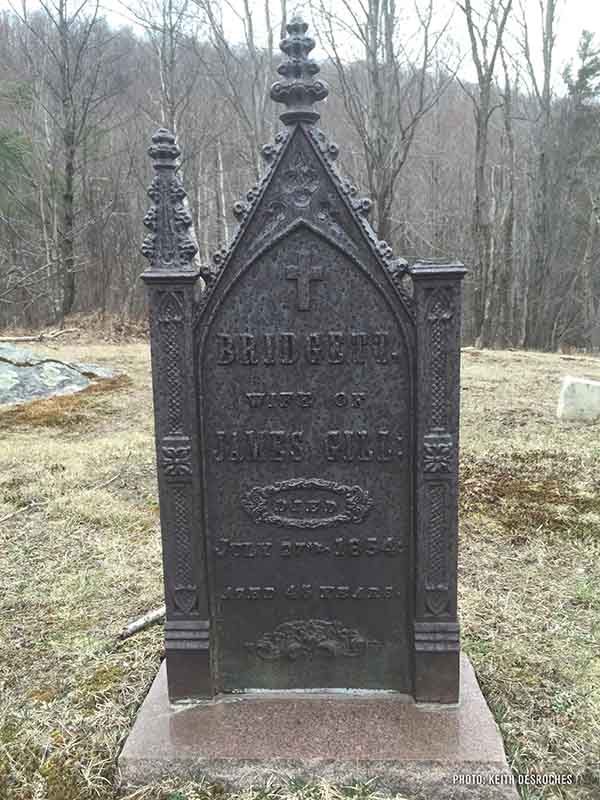 Although the St. Thomas and Irish Settlement cemeteries are still in use today, the Doran Cemetery was abandoned after 1878. The soil and topography may have played a part in the narrow valley, Pleasant Valley, which is between the crest of the Green Mountains and a small parallel ridge called “Macomber Mountain.” The cemetery is surrounded on the north, south, and east sides by a hay field and a forest on the west. The cemetery is about 3.5 miles from Underhill Center and 2.8 miles from the Underhill/Cambridge town line.
The area does not seem like the best place for a cemetery or a church. The right of way to the lot goes through a low spot in the hay field that is very wet during the spring and fall of the year. The land is very rough with bedrock and boulders penetrating the surface. The surface is covered with small depressions and mounds due to animal burrows, ant hills, decomposed trees, tree throws, cattle grazing in the cemetery, rocks being moved out of the cemetery to make up the stonewalls, and vehicles being driven into the cemetery. It is possible that some of these depressions may be unmarked graves. The trees and brush have been recently cut down on the east side of the lot, but still remain in piles within the cemetery. The west side of the cemetery remains wooded.

LAYOUT OF THE CEMETERY 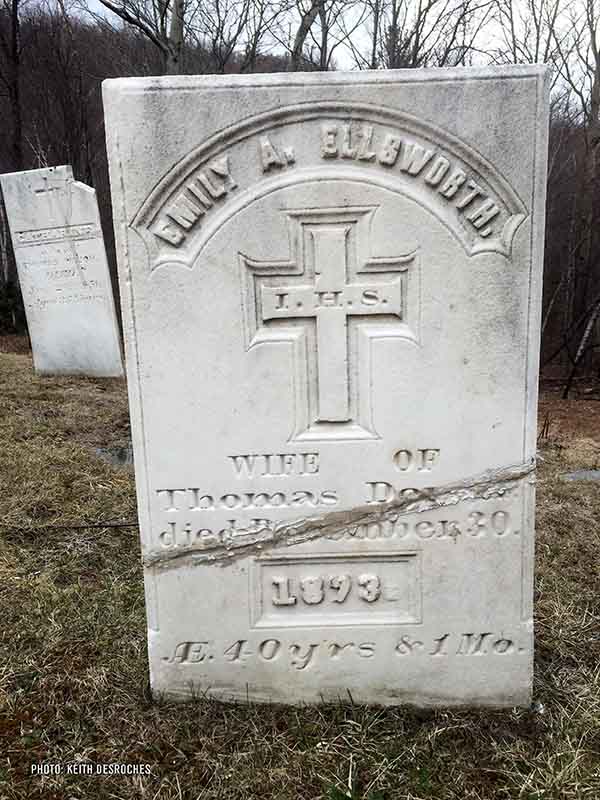 Fourteen graves are those of children eighteen years old or under 3 Seven people died between the age of eighteen and forty-five and three people between the age of sixty-five and ninety-five. Eight people buried in the cemetery were victims of typhoid, consumption, or diphtheria epidemics, which spread through the area between 1850 and 1880 (Luck 1970:15). Susan, Edward, and Eliza Doran and Susannah McMannus died during the diphtheria plague of 1866, the effect of which is evident in cemeteries throughout the area. The first person to be buried in the cemetery was Margaret Kelley on July 28, 1847.
1 This is the headstone of James Morris, died March 7, 1831.
2 Bridgett Gill, the wife of James Gill, died July 27, 1854 at the age of forty-five. According to Luella Lamphere, another cast iron
headstone is said to.have been in the cemetery, but its whereabouts is unknown.
3 Emily A. Doran, Eliza J. Doran, Edward L. Doran, Thomas Doran, James A. Doran, Susan E. Doran, John Carney, John McNulty,
Susannah McMannus, Mary Waugh, Annie Waugh, James Waugh, Thomas Burns, and Margaret Kelley