A Pretty Large Family Any Way You Look at Them!

Eleven Are Over Six Feet, While Father Is Seven Feet Tall.

Refined Folk, Educated and Courteous, and Friends Are Legion.

CAMBRIDGE, VT., March 8. – Vermont has grown the largest family in the world. Up in this neck of the woods in Lamoilie county in the towns of Cambridge, Underhill, and Pleasant Valley, hundreds know and like the giant Bogues. 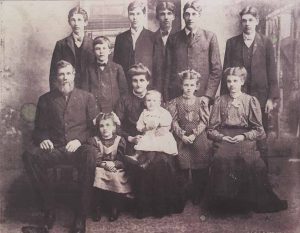 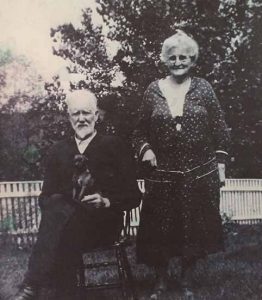 Mrs. Bogue mother of this gigantic family, is the only “dwarf.” She is only five feet ten. The Bogues were both born at Enosburg Falls, Vt., and lived there until twenty-two years ago, when they move to Cambridge, Vt., their present home. The mother and father of Mr. Bogue were small people being less than average height, but he had a grandfather who was over six feet. The brothers and sisters of Hiram Bogue and Mrs. Bogue are people of average height.
The Bogues all had a sense of humor. Miss Ida, laid up with a broken ankle from a fall on the ice, explained the family was so tall was because in the chilly climate of northern Vermont the Bogues could not grow sideways; they had to grow “up.” She said the family was a very good-natured one and all the member smiled when they bumped heads on the chandeliers and when going through low doorways.
Tweet Pin It 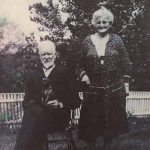